The greens will be closed Wednesday - Friday September 28 - 30 for fall aeration and topdressing. Volunteers needed 1:00 to 4:00 Wednesday and Thursday. Contact [email protected] if you can help or just show up and talk to Gavin.

On Saturday, July 23rd, the 2022 novices competed in the SPLBC Novice Singles Championships. There were twelve women and ten men competing for their one and only chance to be a novice champion.

Both groups played three morning games and based on points and differential, only the top four men and top four women progressed to the semi-finals.

In the Women’s semi–finals, Rachel Young outplayed Caroline Brunt to win 15-2, while the game between Jo Britton and Cathy Hine ended with a 11-7 win for Jo.

In the womens final Jo Britton got off to a strong start (8-0 after four ends) before Rachel recovered to win 8 of the following 9 ends to win 16-9 and earn the title of 2022 Women’s Novice Singles champion.

In the men’s group, Aurele Dufour scored a four in the last end to edge past Ralph Wettstein 10-8. In the other semi-final, Alan Jones and Bennie Dingemanse battled it out with Alan prevailing 12-9 to move to the final. In the final, Alan defeated Aurele 16-5 to become the 2022 Men’s Novice Singles Champion. In the 3rd place game, Ralph defeated Bennie 14-4. 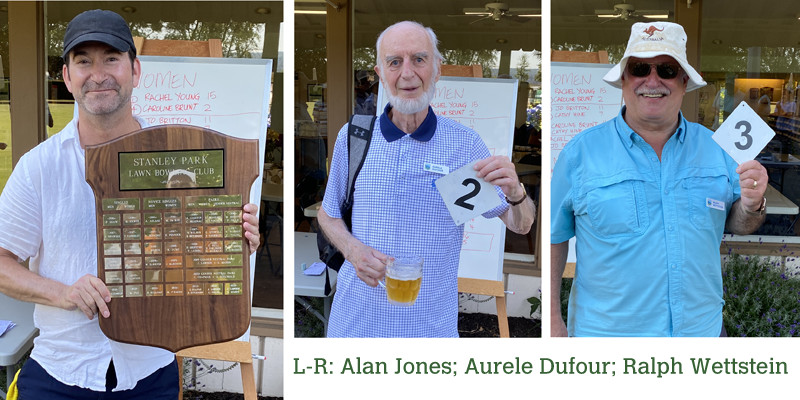